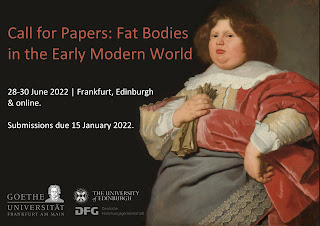 
In the emerging field of Fat Studies, historical overviews about the perception and representation of fat and dieting tend to focus on the 19th and 21st centuries. An early exception was Elena Levy-Navarro’s The Culture of Obesity in Early and Late Modernity (2008) which sought to situate the beginnings of ‘modern’ fat hatred in the early modern period. Inspired by Mikhail Bakthin and Norbert Elias, Levy-Navarro argued that the premodern period was a ‘time before fat’, as she suggested it was only
with the development of a ‘civilized elite’ that the individualized, self-contained body could be ‘violated by fat flesh’.

More recent studies, however, such as Georges Vigarello’s Les métamorphoses du gras. Histoire de l’obésité du Moyen Âge au XXe siècle (2010) or Christopher E. Forth’s Fat. A Cultural History of the Stuff of life (2019) have demonstrated that the slim silhouette could already be an ideal for European elites in the Medieval period and that the fat body could be viewed as socially inferior from Roman Antiquity onwards. Moreover, scholars such as Michael Stolberg and Maria-Carla Gadebusch Bondio, have shown how physicians’ advice manuals containing instructions on how to avoid fatness were printed as early as the 1480s, and that the treatment of obesity became part of the university medical curriculum in the later sixteenth century.
This conference seeks to build on and amplify this work by investigating early modern fatness as both aesthetic judgment and social experience. Areas papers might investigate include:

Call for Papers: Fat Bodies in the Early Modern World 28-30 June 2022: Frankfurt, Edinburgh & online. • Where, when and under what conditions could a body be perceived as fat?
• What is the relationship between sociocultural norms and individual preferences with regard to bodily ideals?
• How did it feel to be fat in an era before the concept of ‘weight’ and the weighing scale became ubiquitous?
• How did concepts of fatness/thinness link with ideas about humoral balance, temperament and character?
• In an increasingly interconnected world how was fatness understood in terms of geohumoralism or xenophobia ?
• How is thinness and fatness discussed and appraised in a wide range of literary, historical and artistic contexts?
• What methods did people employ to create a fashionable physique - through, for example, structured clothing or diet in the broadest sense?

Please send us an abstract of up to 300 words, and a short CV or link to a personal website, by 15 January 2022. This conference will take place simultaneously in Frankfurt, Edinburgh and online in order to save on air travel and widen accessibility. For speakers who wish to travel to either
conference hub, expenses will be reimbursed.