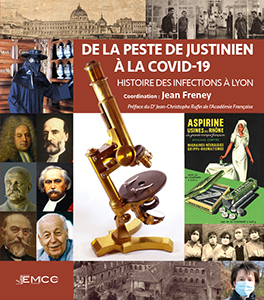 Contagious Connections in Vast Early America and the Atlantic World

The Omohundro Institute of Early American History & Culture invites  applications from scholars across academic disciplines for participation  in a series of workshops dedicated to revisiting and rethinking the  history and historiography of epidemics in Vast Early America and the  Atlantic World. Co-chaired by Ryan Kashnanipour (University of Arizona)  and Claire Gherini (Fordham University), “Contagious Connections” is a  series of six works-in-progress seminars that will take place, online,
between January and May 2022 in which participants will convene to  discuss and workshop pre-circulated papers. We invite proposals for  unpublished, chapter-length pieces on epidemics in Vast Early  America/The Atlantic World for those workshops.

Epidemics were a foundational force in the early history of the Americas  and the larger Atlantic World. Yet their interdisciplinary and  comparative analysis has often been restricted by the imperial and
chronological priorities of these regions’ subfields as well as older  biomedical and demographic approaches to the study of disease. Rather  than rehashing whether acquired immunity destined Native Americans to  extirpation and Africans for slavery in the Americas, this series  proceeds from the idea that epidemics are epistemological and  ontological forces: they have a historical materiality but become
epidemics of a particular disease when historical actors collectively  decide to name and treat them as such. We invite paper submissions that  engage with epidemics and/or infectious diseases beyond their biological attributes. We are open to papers of many kinds, possible themes and questions might include:

* The political and social ramifications, in particular times and places, of naming widespread infirmity an epidemic. How do such pronouncements and definitions work to mobilize resources? What
populations do they render legible? Which figures and administrative bodies got to make these definitions?
* What administrative differences between empires rendered such pronouncements and definitions easier to make and contest, as well as see in the archive?
* How did the divergent temporalities of so-called crowd diseases’ (smallpox, yellow fever, measles for example) and those that are more chronic disorders (yaws, coco-bays, dropsy) shape official and
quotidian responses to them? * Naming generalized infirmity an epidemic magnifies its visibility in
the archive. Papers might explore the more quotidian types of infirmity that have been overlooked as a consequence and how they were managed and thought about by the communities affected by them.
* Papers might use the uneven impact of different epidemics as a window onto the endemic nature of illness in the early modern Americas and underlying health disparities.
* Sudden and widespread sickness tends to galvanize discovery of its modes of communication. To think about the materiality of epidemics, papers might focus on how these discoveries reconfigure mobility and daily habits of living. Or they might use authorities’ efforts to regulate or outlaw quotidian practices of bodily health or sustenance to recover what are often overlooked materials and practices that are central to gendered and racialized economies of care.
* Papers might explore the development of new forms mourning, internment, and memorialization that communities developed to reckon with the new scale of death created by an epidemic.

As we hope to see this series culminate in a community of scholars who  might polish their works for collective publication in an edited collection, in summer 2022, should conditions allow, we may convene in-person in Washington D.C. for one week for a second round of workshops where participants will present and receive feedback on revised versions of their papers.

The original deadline for submissions has been extended. Interested individuals are asked to submit an abstract no longer than 500 words and abbreviated CV no longer than three pages by *JULY 15, 2021*: 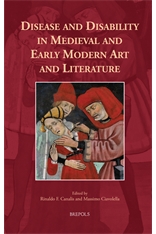 Disease and Disability in Medieval and Early Modern Art and Literature


Humanity has always shown a keen interest in the pathological, ranging from a morbid fascination with ‘monsters’ and deformities to a genuine compassion for the ill and suffering. Medieval and early modern people were no exception, expressing their emotional response to disease in both literary works and, to a somewhat lesser extent, in the plastic arts. Consequently, it becomes necessary to ask what motivated writers and artists to choose an illness or a disability and its physical and social consequences as subjects of aesthetic or intellectual expression. Were these works the result of an intrusion in their intent to faithfully reproduce nature, or do they reflect an intentional contrast against the pre-modern portrayal of spiritual ideals and, later, through the influence of the classics, the rediscovered importance and beauty of the human body?
The essays contained in this volume address these questions, albeit not always directly but, rather, through an analysis of the societal reactions to the threats and challenges that essentially unopposed disease and physical impairment presented. They cover a wide range of responses, variable, of course, according to the period under scrutiny, its technological moment, and the usually fruitless attempts at treatment.

Part I. Medieval and Transitional Periods

The Art of Medicine in Byzantium: Disease and Disability in Byzantine Manuscripts
Alain Touwaide

Miracle and the Monstrous: Disability and Deviant Bodies in the Late Middle Ages
Jenni Kuuliala.

Malady in Literary Texts from the Medieval and Early Modern Periods. Some Hypotheses on a Paradoxical Constellation
Joachim Küpper

‘Yet have I in me something dangerous’: On the Interplay of Medicine and Maleficence in Shakespeare’s Hamlet
Sara Frances Burdorff

Science and the Moving Image: Histories of Intermediality

Since the advent of film in the late nineteenth century, moving images have been integral to making and communicating science. A rich interdisciplinary literature has examined such representations of science in the cinema and on television and investigated how scientists have used moving images to conduct research and communicate knowledge. Responding to growing interest in science and the moving image, this online workshop uses the concept of ‘intermediality’ as a starting point to discuss new approaches and methodologies. Intermediality, coined by media scholars to describe the interplay between different media, magnifies their multiple meanings and heterogenous interrelations. Moving images especially invite intermedial analysis because they are often composed of interrelated visuals, speech, music, and text; film can also be cut into stills for reproduction in newspapers, advertisements, and journals. Intermedial approaches thus allow scholars to assess not only the relationship between scientific practices and media forms, but also the afterlives, circulation, and reception of these media in a richer historical context. With its attention to relations and movement between media, intermediality also expands our understanding of the visual cultures of science, including in parts of the world and among groups that are underrepresented in current scholarship. We particularly invite submissions that use intermediality to engage critically with the scope and limits of science and the moving image.
Possible themes might include:

· Processes of translation between different media, including film, television, radio, and print

· Time-lapse, frame-by-frame analysis, and other analytical methods as intermedial practices

· The cultural reproduction through scientific images of gender, race, and class.

We welcome talks from postgraduate students, early-career researchers and established scholars. We are looking for abstracts (max. 250 words) for 15-20 minute talks, which will be arranged in thematic panels. Submissions should be sent to movingimagescience@gmail.com. The deadline for proposals is June 28th, 2021 and we aim to respond to proposals within four weeks.

This workshop will take place online via Zoom and is hosted by the Department of History and Philosophy of Science, University of Cambridge. The workshop is kindly supported by the Researcher Development Fund and the G.M. Trevelyan Fund. 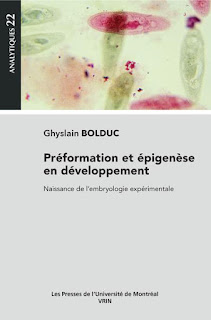 Dr Samways writes to the editor
Talk by Professor Tom Treasure (UCL)
The Faculty for the History and Philosophy of Medicine and Pharmacy's final lecture for the year will be held online on Wednesday 16 June at 6pm. Please feel free to circulate details to your colleagues, students and networks.
Tracing back the history of mitral stenosis during a mid-career sabbatical, I found an article in The Lancet of 1898 by DW Samways of Mentone proposing heart surgery. He was an inveterate writer of ‘Letters to the Editor’ on many and varied topics - blood-letting, eradication of mosquitos, health spas, sea water injections, typhoid fever, vaccination - and his own tuberculosis which is what took him to the French Riviera. Unable to practise in France during the 1914-19 war, he worked at a War Hospital in Exeter. He continued to write - on the design of ambulances, treatment of contaminated wounds, banding, fractures, anaesthetics - always with scientific curiosity and humanity. Dr Samways in my guide, witness and chronicler for my Flavell Lecture.

Students – Free to attend, please book through the Faculty facultyhp@apothecaries.org 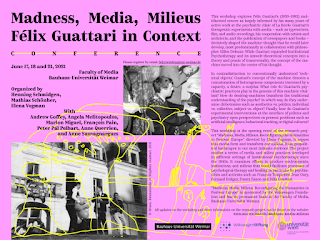 This conference explores Félix Guattari's (1930–1992) multifaceted oeuvre as largely informed by his many years of active work at the psychiatric clinic of La Borde. Guattari’s therapeutic experiments with media – such as typewriters, film, and audio recordings, his cooperation with artists and architects, and the publication of newspapers and books decisively shaped the machine-thought that he would later develop, most predominantly in collaboration with philosopher Gilles Deleuze. While Guattari expanded Institutional Psychotherapy and its umwelt-theoretical concepts into a theory and praxis of transversality, the concept of the machine moved into the center of his thought.

In contradistinction to conventionally understood ‘technical objects‘, Guattari’s concept of the machine denotes a concatenation of heterogenous components traversed by a capacity, a desire, a surplus. What role do Guattari’s psychiatric practices play in the genesis of this machinic vitalism? How do desiring-machines transform the traditional understanding of the psyche? In which way do they undermine dichotomies such as aesthetics vs. politics, individual vs. collective, subject vs. object? Finally, how do Guattari’s experimental interventions at the interface of politics and psychiatry open perspectives on present problems such as artificial intelligence, behavioral tracking, or digital cultures?

This conference is the opening event of the research project »Madness, Media, Milieus. Reconfiguring the Humanities in Postwar Europe« directed by Elena Vogman. It argues that media form and transform our milieus, from geopolitical landscapes to our most intimate environs. The project studies a series of media and milieu practices developed in different settings of Institutional Psychotherapy since the 1940s. It examines efforts to produce environments, institutions, and milieus that would facilitate processes of psychological therapy and healing, in particular by psychiatrists and activists such as François Tosquelles, Jean Oury, Fernand Deligny, Frantz Fanon and Félix Guattari.

Drawing on newly discovered archives, the project explores the fundamental role of art and media which crucially contributed to the emergence of psychiatric milieus. At the same time, it investigates the productive repercussions of these media-milieu practices in critical humanities discourses. The project argues that these practices had a crucial impact on the humanities in postwar Europe, in particular post-structuralism and post-colonial studies, but also media theory, film studies, and science and technology studies. Media mold and modify milieus: This is the general hypothesis that will be reflected in four individual sub-projects carried out by historians of art, science, and technology, culminating in a joint exhibit presenting largely unseen texts, images, and films.


All updates on the workshop and more information on the research project can be found on the website: www.uni-weimar.de/madness-media-milieus