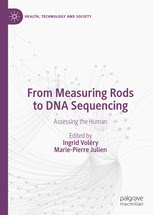 From Measuring Rods to DNA Sequencing: Assessing the Human

Drawing, compass, squared layer, measuring rod, statistical table, gene sequencer: the devices which are used to classify, figure and number human beings have a long scientific, economic, moral and political history. Nevertheless, sociology has only recently started to deal with these issues. In France, sociology has historically analysed body especially drawing from studies on social classes and socialization patterns or research on measurement in order to show links between government and quantification approaches. However, in the last twenty years, we are observing the emergence of a French sociology specifically interested in the classifications and the metrologies of the human body. This sociology is particularly influenced by both Anthropology of Science and Medical Anthropology which came in the French scientific debate especially through intersectional studies and through a renewal of pragmatic approaches. It is exactly at the confluence of these two movements that this book is rooted. Its purpose is to contribute to the understanding of human metrology, its emergence, its circulation and its reception.

This introductory chapter aims to contribute to the theoretical and epistemological construction of measure and measuring, by reviewing the main analytical frameworks through which the measurement of the human has been understood. In this book, measurement is approached through three key dimensions: as an indicator of particular interpretative frameworks (historical forms of human cognition, avatars of power-knowledge dispositifs, expression of the rationalization/individualization of the world) or as a praxis that does not just involve linguistic, metric and graphic aspects but also which produces ontologies by othering bodies and temporalities. The time dimension in biopower is particularly emphasized in this book, with several contributions showing how much measurements of the human provide a particularly fertile field of analysis.


Chapter 2 - Producing Otherness through Resemblance. Bodily Orifices and the Measuring of the Human (1800-1860)
Nicoletta Diasio

While all societies produce otherness, at the beginning of the19th century human sciences pretended to systematize and scientifically measure the differences between human varieties. Through analyzing discourses on bodily orifices (mouth, ears, eyes, fontanel, foramen magnum, genitalia…) within French medical and anthropological literature, the chapter shows how statistics, serial analysis, and anthropometrical averages were anticipated and supported by diverse observation and data collection methods based on a visual approach. The ocular and mathematical paradigms, situated at the crossroads of science and politics, were far from being mutually exclusive: they coexisted in tension, and consolidated each other, unified by the role of resemblance in providing a definition of biologized otherness (the savage, the primitive, the degenerated types, the poor).

The chapter draws a socio-history of the study of “age in relation to bone” in forensic medicine between 1813 and 1906. How is the maturation of the person understood? Is age at the heart or at the margins of the characterization of the person? Is it seen as an ontology or as a developmental stage? The author shows a process of biologization of age which was previously seen as an unmeasurable social and individual criterion and which became an evolutive but standardizable biological state that could be assessed. The chapter also stresses the importance of the sociopolitical contexts and the situations of expertise in which and for which these knowledges were produced.


Chapter 4 - Thinking “quality of life”: from measures to categorizations of the human beings
Milena Maglio and Vivien Garcia

Since the 1970s, “quality of life” has been a political and a social matter of concern. In the medical field, “Quality of life (QoL) measures” gradually appeared. When it came to be used to justify withholding and withdrawing medical treatments, it rose new ethical problems and called for a more in-depth reflection on the distinctions, categorizations, and hierarchies between human beings that it could involve. The first section of this chapter will focus on the emergence of this notion “quality of life”, on its integration into medicine and its uses. The second section describes the main categorizations that were proposed in the bioethical field. The last section introduces some elements to question the unthought that persists in bioethical discourses on quality of life.

With recent advances in germline editing, the data produced by genomics is on the verge of transforming human reproduction and the decisions that affect it. The chapter shows the new view of birth, personhood and the resulting parental responsibility. Marked by the omnipresence of genetic measurement, birth is apprehended in terms of probabilistic prediction, while the genome appears as the infrastructure of the person which, once deciphered, will make it possible to anticipate individual destinies summarized in a series of probabilities. Finally, a set of normative considerations, promoted by an influential bioethics literature, is added to this, drawing the portrait of the “good parent” who has the duty to make a genetic selection in the interest of the unborn child.


Chapter 6 - From “technicized” bodies to body technologies: the human in resuscitative care, between objectivization and subjectivization
Denise Thomas

Drawing from a study of three intensive care units, the author shows how patients care, whose their lives are in danger, is articulated around two lines of conduct and measurement of the body. The first line refers to the medical dimension of the treatment (setting of assistive devices, monitoring, evaluation of clinical signs, etc.). The second line refers to the social nature of the individual, through “body technologies” (hair styling, shaving, washing, touching, massaging, etc.). The treatments provided by the life-support services shows how the body, far from being limited to medical objectivity, also represents the place of social obligations and instituted practices.


Chapter 7 - Bone Geopolitics. Bone Age and the Racialization of Growth in UK and US Pediatrics (1940-1980)
Ingrid Voléry and Marie-Pierre Julien

In the early 2000s some voices spoke out against the use of “bone age” assessment abacuses, that had been designed for “Caucasian” populations in the 1930s to determine the age of “non-Caucasian” migrant children. How did bone age, whose standards were established by nineteenth century forensic medicine then used in the context of hygienist policies as an indicator of populational development, come to be used as a differentiator between “Caucasians” and “non-Caucasians”? This shift occurred in the very specific context of UK and US pediatrics between the 1940s and the 1970s. This chapter shows how bone age and, more widely, growth standards elaborated in social pediatrics from the 1930s to the 1960s, became criteria for the racialization of specific populations (especially Africans) and the concurrent de-racialization of Europeans.


Chapter 8 - Models of corporeality and controversies around puberty
Virginie Vinel

This chapter investigates the plurality of models proposed by medicine to observe the body between childhood and adolescence during the twentieth century. Models vary if the approach is anatomical-clinical, bio-psycho-social, photographical or endocrinological. However all these approaches aimed not only to better understand the pubertal process, but also to define what is the “true puberty” and what constitutes a deviation from its “normal” course, while legitimating medical intervention. The analysis of the American controversy on the precocious onset of puberty, at the end of the 1990s, reveals not only the types of changing bodies, but also the types of children and adolescents that are depicted and produced by contemporary medicine.


Chapter 9 - Everyone for himself and all together? Thinking “race” between social science, epidemiology and medicine
Catherine Cavalin, Odile Macchi, Paul-André Rosental.

This chapter investigates the new insights that social sciences can bring to the question of racial categorizations by examining the etiology of complex diseases, which are thought to be triggered or exacerbated by an individual’s life path and exposure to a “high-risk environment”. The authors aim to contribute to an ongoing debate in life science, especially in epigenetics where some scholars highlight a “molecularization” of both the biography and the environment. These discussions interrogate the boundaries between disciplines (and their respective taboos), without however implying that these boundaries could be easily abolished.

In the concluding chapter, we highlight five different measurement styles identified by the contributions of this book. We also show that they vary according to the socio-historical context and to the situations of interaction or expertise where they are deployed. Far from being immutable and homogeneously shared practices, these styles can be regarded as many ways of “seeing” and “doing” with the world, constantly tested by different groups that aggregate or disaggregate around these measurements, thus producing new ontologies. New parts of the body and new life forms (pre-fertilization, post-death) acquire social density as long as they are observed and standardized. All the cases here examined illustrate that metrologies are indivisible from ontogenies. The chapter will explore this deep interconnection.