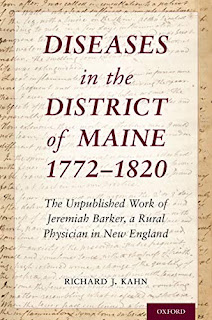 Diseases in the District of Maine 1772 - 1820. The Unpublished Work of Jeremiah Barker, a Rural Physician in New England

Jeremiah Barker practiced medicine in rural Maine up until his retirement in 1818. Throughout his practice of fifty years, he documented his constant efforts to keep up with and contribute to the medical literature in a changing medical landscape, as practice and authority shifted from historical to scientific methods. He performed experiments and autopsies, became interested in the new chemistry of Lavoisier, risked scorn in his use of alkaline remedies, studied epidemic fever and approaches to bloodletting, and struggled to understand epidemic fever, childbed fever, cancer, public health, consumption, mental illness, and the "dangers of spirituous liquors."

Dr. Barker intended to publish his Diseases in the District of Maine 1772-1820 by subscription - advance pledges to purchase the published volume - but for reasons that remain uncertain, that never happened. For the first time, Barker's never before published work has been transcribed and presented in its entirety with extensive annotations, a five-chapter introduction to contextualize the work, and a glossary to make it accessible to 21st century general readers, genealogists, students, and historians.

This engaging and insightful new publication allows modern readers to reimagine medicine as practiced by a rural physician in New England. We know much about how elite physicians practiced 200 years ago, but very little about the daily practice of an ordinary rural doctor, attending the ordinary rural patient. Barker's manuscript is written in a clear and engaging style, easily enjoyed by general readers as well as historians, with extensive footnotes and a glossary of terms. Barker himself intended his book to be "understood by those destitute of medical science."