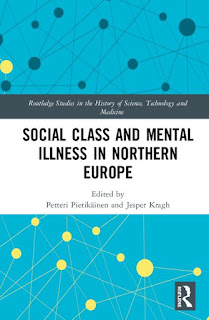 This book examines the relationship between social class and mental illness in Northern Europe during the 20th century. Contributors explore the socioeconomic status of mental patients, the possible influence of social class on the diagnoses and treatment they received in psychiatric institutions, and how social class affected the ways in which the problems of minorities, children and various ‘deviants’ and ‘misfits’ were evaluated and managed by mental health professionals. The basic message of the book is that, even in developing welfare states founded on social equality, social class has been a significant factor that has affected mental health in many different ways – and still does.
Publié par Alexandre Klein à 06:07