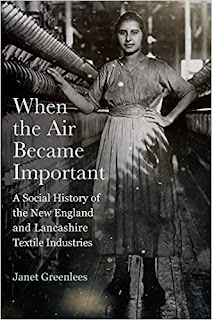 When the Air Became Important: A Social History of the New England and Lancashire Textile Industries

In When the Air Became Important, medical historian Janet Greenlees examines the working environments of the heartlands of the British and American cotton textile industries from the nineteenth to the late twentieth centuries. Greenlees contends that the air quality within these pioneering workplaces was a key contributor to the health of the wider communities of which they were a part. Such enclosed environments, where large numbers of people labored in close quarters, were ideal settings for the rapid spread of diseases including tuberculosis, bronchitis and pneumonia. When workers left the factories for home, these diseases were transmitted throughout the local population, yet operatives also brought diseases into the factory. Other aerial hazards common to both the community and workplace included poor ventilation and noise. Emphasizing the importance of the peculiarities of place as well as employers’ balance of workers’ health against manufacturing needs, Greenlees’s pioneering book sheds light on the roots of contemporary environmentalism and occupational health reform. Her work highlights the complicated relationships among local business, local and national politics of health, and community priorities.
Publié par Alexandre Klein à 06:00