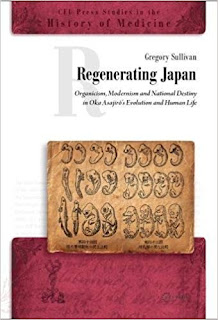 As the first step toward a comprehensive reinterpretation of the role of evolutionary science and biomedicine in pre-1945 Japan, this book addresses the early writings of that era s most influential exponent of shinkaron (evolutionism), the German-educated research zoologist and popularizer of biomedicine, Oka Asajir (1868 to 944). Concentrating on essays that Oka published in the years during and after the Russo-Japanese War (1904 to 1905), the author describes the process by which Oka came to articulate a programmatic modernist vision of national regeneration that would prove integral to the ideological climate in Japan during the first half of the twentieth century. In contrast to other scholars who insist that Oka was merely a rationalist enlightener bent on undermining state Shinto orthodoxy, Gregory Sullivan maintains that Oka used notions from evolutionary biology of organic individuality, especially that of the nation as a super-organism, to underwrite the social and geopolitical aims of the Meiji state.

The author suggests that this generative scientism gained wide currency among early twentieth-century political and intellectual elites, including Emperor Hirohito himself, who had personal connections to Oka. The wartime ideology may represent an unfinished attempt to synthesize Shinto fundamentalism and the eugenically-oriented modernism that Oka was among the first to articulate.
Publié par Alexandre Klein à 06:06