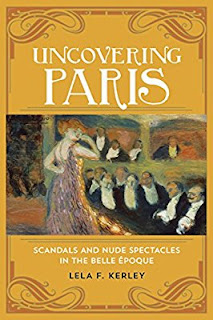 Uncovering Paris. Scandals and Nude Spectacles in the Belle Époque


From 1889 to 1914 nude spectacles increased at an astonishing rate as a result of burgeoning artistic experimentation, the commercialization of the female body, and the rise of urban nightlife. In particular, artists’ balls and music halls provided creative spaces in which women, artists, impresarios, and the illustrated press could cast the natural body as a source of sexual pleasure, identity, and reform. Emphasizing the role of erotic entertainment as an outlet and agent of modern sensibilities, Uncovering Paris: Scandals and Nude Spectacles in the Belle Époque offers a fresh approach to important topics of the period—Bohemian artists, the New Woman, and press censorship—and reinterprets them through the lens of la femme nue.

Having inherited her name from the pictorial female Nude and the Nude’s real-life counterpart, the artist’s model, la femme nue operated as a screen onto which various groups projected their artistic drives, sexual desires, monetary interests, and cultural anxieties. A struggle to define pornography and art, freedom and censorship, and public and private spheres ensued among artists, theater directors, and moral leagues as a century-long tradition of equating civilization with clothing broke down in the face of performative challenges. In posing, singing, acting, and dancing in naturalist presentations, the artist’s model-turned-erotic entertainer engendered crises in ways of seeing the female body that contributed to and was indicative of a changing moral climate within which women were accorded more freedom to corporeally express themselves. Once denigrated and denounced as a sign of vulgar working-class sexuality, the revelation of female flesh became an integral aspect of twentieth-century French body culture.

Drawing upon a range of colorful commentaries, dramatic debates, and evocative photos, Lela F. Kerley highlights the importance of nudity in the redrawing of moral boundaries as she uncovers key moments that amounted to a “culture war” in the years leading up to World War I. Through an investigation of street riots, court cases, and anti-pornography campaigns, Uncovering Paris offers an interdisciplinary approach to the scholarship on Belle Époque sexual politics and a rich glimpse into the social construction of morality in Belle Époque France.