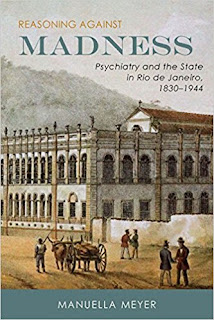 Reasoning Against Madness: Psychiatry and the State in Rio de Janeiro, 1830-1944

Reasoning Against Madness: Psychiatry and the State in Rio de Janeiro, 1830-1944 examines the emergence of Brazilian psychiatry, looking at how its practitioners fashioned themselves as the key architects in the project of national regeneration. The book's narrative involves a cast of varied characters in an unstable context: psychiatrists, Catholic representatives, spiritist leaders, state officials, and the mentally ill, all caught in the shifting landscape of modern state formation.

Manuella Meyer investigates the key junctures at which psychiatrists sought to establish their authority and the ways in which their adversaries challenged this authority. These moments serve as productive points from which to explore the moral and political economies of mental health, demonstrating how socio-political negotiations shape psychiatric professionalization. Meyer argues that the gradual adoption of punitive configurations of insanity helped sanction socioeconomic and political inequalities during a time of rapid socioeconomic, political, and cultural transformation.
Publié par Alexandre Klein à 06:01