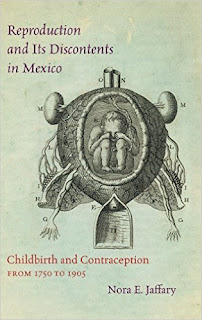 Reproduction and Its Discontents in Mexico: Childbirth and Contraception from 1750 to 1905

In this history of childbirth and contraception in Mexico, Nora E. Jaffary chronicles colonial and nineteenth-century beliefs and practices surrounding conception, pregnancy and its prevention, and birth. Tracking Mexico's transition from colony to nation, Jaffary demonstrates the central role of reproduction in ideas about female sexuality and virtue, the development of modern Mexico, and the growth of modern medicine in the Latin American context.

The story encompasses networks of people in all parts of society, from state and medical authorities to mothers and midwives, husbands and lovers, employers and neighbors. Jaffary focuses on key topics including virginity, conception, contraception and abortion, infanticide, "monstrous" births, and obstetrical medicine. Her approach yields surprising insights into the emergence of modernity in Mexico. Over the course of the nineteenth century, for example, expectations of idealized womanhood and female sexual virtue gained rather than lost importance. In addition, rather than being obliterated by European medical practice, features of pre-Columbian obstetrical knowledge, especially of abortifacients, circulated among the Mexican public throughout the period under study. Jaffary details how, across time, localized contexts shaped the changing history of reproduction, contraception, and maternity.
Publié par Alexandre Klein à 06:01