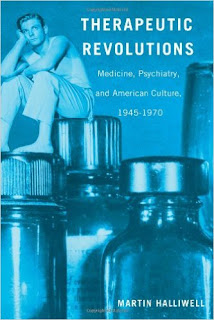 
Therapeutic Revolutions examines the evolving relationship between American medicine, psychiatry, and culture from World War II to the dawn of the 1970s. In this richly layered intellectual history, Martin Halliwell ranges from national politics, public reports, and healthcare debates to the ways in which film, literature, and the mass media provided cultural channels for shaping and challenging preconceptions about health and illness.

Beginning with a discussion of the profound impact of World War II and the Cold War on mental health, Halliwell moves from the influence of work, family, and growing up in the Eisenhower years to the critique of institutional practice and the search for alternative therapeutic communities during the 1960s. Blending a discussion of such influential postwar thinkers as Erich Fromm, William Menninger, Erving Goffman, Erik Erikson, and Herbert Marcuse with perceptive readings of a range of cultural text that illuminate mental health issues--among them Spellbound, Shock Corridor, Revolutionary Road, and I Never Promised You a Rose Garden--this compelling study argues that the postwar therapeutic revolutions closely interlink contrasting discourses of authority and liberation.
Publié par Alexandre Klein à 06:05