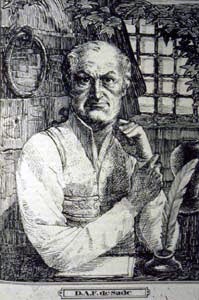 
200 years ago – on Dec. 2, 1814 –, the libertine novelist Marquis de Sade died in an asylum. During that era in history, many ideas on sexuality have been formulated that still influence modern society: the gender dichotomy, sexuality as a natural and private issue, infantine innocence, explicit sexual imagery being taboo, the nuclear family as cornerstone of society, etc. Sade transgressed these beliefs in his work, and opposed such ideas that have become ingrained in Western societies. He made sexuality explicit in his work, put sodomy above coital sex, plural loves above monogamy, incest above marriage and family, spoiling sperm above sparing it, gender diversity above binary discipline, and instead of opposing reason to emotion, he gave them equal value. However, up until now, little attention has been paid to the relation between Sade’s transgressive ideas and contemporary views of sexuality that got their shape during the Enlightenment. A thorough investigation of this relation and of the actuality of Sade’s work is the general aim of the two-day conference in Amsterdam.