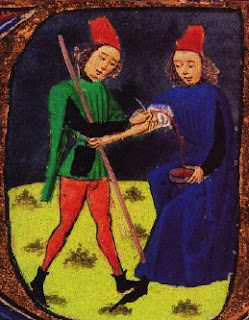 Blood in the medieval and early modern periods was much more than simply red fluid in human veins. Defined diversely by theologians, medics, satirists and dramatists, it was matter, text, waste, cure, soul, God, and the means by which relationships were defined, sacramentalised and destroyed. Blood was also a controversial ingredient in the production of matter, from organic and medical to mechanical and alchemical. Between the fourteenth and seventeenth centuries debates about the nature and function of blood raised questions about the limits of identity, God’s will for his creatures, science’s encounter with the self, and the structure of families and communities, and its impact was felt in artistic constructions on stage, in print, and on canvas.

This two and a half day conference will gather early modern and medieval scholars from English, history, art history and medical history, to ask: ‘What is Renaissance blood?’

The Blood Conference will feature a professional production of the Croxton Play of the Sacrament directed byElisabeth Dutton, and a session led by David Fuller, with the help of Oxford singers, on early sacramental music and Eucharistic blood. Wellcome Trust archivists will also be offering a session on blood material in their collection.

More speakers are now warmly invited. We are particularly interested in interdisciplinary papers, and those with an emphasis on art history and medical history. But any innovative approaches to historical blood are most welcome!