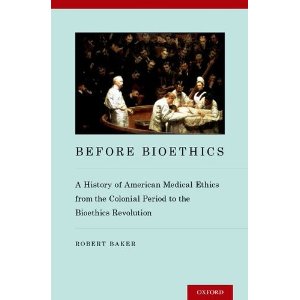 Before Bioethics: A History of American Medical Ethics from the Colonial Period to the Bioethics Revolution

Before Bioethics narrates the history of American medical ethics from its colonial origins to current bioethical controversies over abortion, AIDS, animal rights, and physician-assisted suicide. The first history of American medical ethics published in more than a half century, Before Bioethics tracks the evolution of American medical ethics from colonial midwives and physicians' oaths, to medical society codes and bioethical principles. Applying the concept of "morally disruptive technologies," it analyzes the impact of the stethoscope on conceptions of fetal life and the criminalization of abortion, and the impact of the ventilator on our conception of death and the treatment of the dying. The narrative offers tales of those whose lives were affected by the medical ethics of their era: unwed mothers executed by puritans because midwives found them with stillborn babies; the unlikely trio - an Irishman, a Sephardic Jew and in-the-closet gay public health reformer - who drafted the American Medical Association's code of ethics but received no credit for their achievement, and the founder of American gynecology celebrated during his own era but condemned today because he perfected his surgical procedures on un-anesthetized African American slave women. The book concludes by exploring the reasons underlying American society's empowerment of a hodgepodge of ex-theologians, humanist clinicians and researchers, lawyers and philosophers - the bioethicists - as authorities able to address research ethics scandals and the ethical problems generated by morally disruptive technologies.
Publié par Alexandre Klein à 07:11