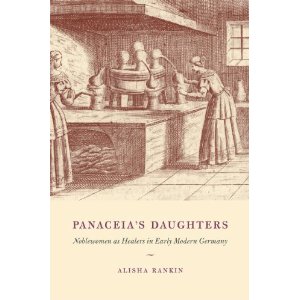 
Panaceia’s Daughters provides the first book-length study of noblewomen’s healing activities in early modern Europe. Drawing on rich archival sources, Alisha Rankin demonstrates that numerous German noblewomen were deeply involved in making medicines and recommending them to patients, and many gained widespread fame for their remedies. Turning a common historical argument on its head, Rankin maintains that noblewomen’s pharmacy came to prominence not in spite of their gender but because of it. Rankin demonstrates the ways in which noblewomen’s pharmacy was bound up in notions of charity, class, religion, and household roles, as well as in expanding networks of knowledge and early forms of scientific experimentation. The opening chapters place noblewomen’s healing within the context of cultural exchange, experiential knowledge, and the widespread search for medicinal recipes in early modern Europe. Case studies of renowned healers Dorothea of Mansfeld and Anna of Saxony then demonstrate the value their pharmacy held in their respective roles as elderly widow and royal consort, while a study of the long-suffering Duchess Elisabeth of Rochlitz emphasizes the importance of experiential knowledge and medicinal remedies to the patient’s experience of illness.
Publié par Alexandre Klein à 08:06