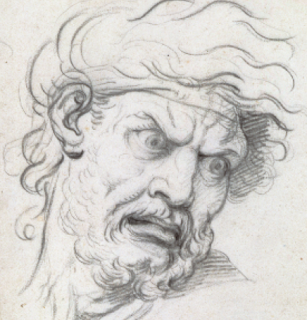 Discourses of Anger in the Early Modern Period


Proposals for contributions to a volume on discourses of anger in the Early Modern Period to be published in the series Intersections are invited. The volume will be edited by Karl A.E. Enenkel (Münster University) and Anita Traninger (Freie Universität Berlin).

Intersections is a peer-reviewed series on interdisciplinary topics in Early Modern Studies published by Brill (Leiden/Boston). Contributions may come from any of the disciplines within the humanities, such as history, art history, literary history, book history, church history, social history, cultural history, and history of ideas. Each volume focuses on a single theme and consists of essays that explore new perspectives on the subject of study. The series aims to open up new areas of research on early modern culture and to address issues of interest to a wide range of disciplines.


Emotion, the perceived counterpoint to reason, has received intense attention in the humanities and the social sciences in recent decades. Anger, however, has traditionally been conceived as pertaining to both reason and passion, since it involves complex mechanisms of rational judgment of social situations but is at the same time characterized by untamed/violent emotional repercussions. Aristotle held that anger was the morally justified seeking of revenge following the incurrence of a slight. Being thus conceived of as a social emotion, anger has since been construed as being composed of sadness and hope, as involving social and moral categories, and as mediating between the past and the future.
Even though anger is characterized as a just reaction to social misdemeanor, it has not been acknowledged universally as a socially beneficial reaction. The Stoics insisted that it was necessary to suppress it at the first showing of angry symptoms in order to achieve freedom from the disturbance of emotions which forms the basis of the good life; Christianity, where Stoic views were adopted very early on, found it difficult to reconcile the idea of anger as the just reaction of a virtuous man with its ideals of passivity.
In the Early Modern period, this already ambiguous conception was complicated by a changing intellectual framework. The Early Modern period sees long-term shifts between traditional systems of thought: a mounting criticism of Aristotelianism, a forceful contestation of Scholasticism, the factioning of religious belief and the emergence of contesting theologies along with moral canons, the rediscovery and transformative appropriation of Stoic and Sceptic doctrines, to name but a few. We are interested in how the notion of anger is informed by these developments.
Despite the recent surge in research on the history of emotions, there is no comprehensive, interdisciplinary account of notions of anger in the early modern period. There is a host of studies on ‚ancient anger‘, and the Middle Ages have also received due attention, but the early modern period has been neglected in this regard, despite a wealth of sources and despite the fact that wide-spread speculation about the emotions in general emerged in Early Modern times.
Thus in our volume, we ask contributors to discuss the fate of anger with a view to the tensions between these developments. Contributors to the volume are invited to trace the framing of anger in various discourses in the Early Modern period, including theology, philosophy, literature, medicine, law, political theory, and the arts, as well as to account for changes in the discourses of anger in this era. We would like to see discussions of anger as a contested field, one that is goverened and defined in various ways by various discourses which may nevertheless converge in literary and non-literary texts, images, religious practice, scholarly debates, etc.
Fields of inquiry and questions to be discussed may include (but are not limited to) the following:
1. Notions of anger: How is anger theorized in the various philosophical and theological schools? Are traditional views being re-valued in the early modern period? Are there alternative and/or new conceptions that gain momentum? Which re-hierarchizations take place?
2. The anthropology of anger: How do notions of anger tie in with concepts of corporeality? How does human anger compare to divine or angelic wrath or even the fury of spirits? How and in what regards is anger gendered – can women be truly angry? How does anger relate to notions of masculinity? Which modes of bodily, facial, gestural expression are seen as signalling anger?
3. Social consequences of anger: What are the uses and functions of anger? Does anger keep having positive connotations? How does anger relate to notions of social order? How does it figure in debates about the management of the passions?
4. The morality of anger: Is anger construed as a sin? Where does it range within the hierarchy of sins in the various religious denominations? What are the trajectories of debates about anger in theology, in casuistry or in moral philosophy?
5. Anger and the arts: Does anger fulfil particular functions in motivating narratives in literature? Are there genre-specific traditions of representing anger (e.g. in emblem books, revenge tragedies, novels, etc.)? How is anger reflected in music and the dramatic arts? Are there visual codes for anger?
6. Remedies of anger: What remedies are there against anger? How do medical attempts at reigning in anger relate to meditative or spiritual practices to pacify an angry mind? Is there a shift in preferred therapies?

The volume is scheduled to be published in 2014. Proposals of about 300 words should be sent electronically to both editors before 1 March, 2013:
anita.traninger@fu-berlin.de (Anita Traninger)
kenen_01@uni-muenster.de (Karl Enenkel)

The decision about the acceptance of papers will be communicated before 1 May, 2013.
For more information see: http://www.brill.com/publications/intersections
Publié par Alexandre Klein à 09:21