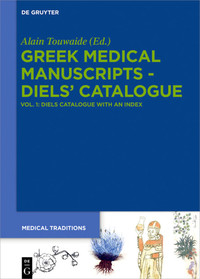 The medical literature of ancient Greece has been much studied during the 20th century, particularly from the 1970s on. In spite of this intense activity, the search for manuscripts still relies on the catalogue compiled in the early 1900s by a group of philologists led by the German historian of Greek philosophy and medicine Hermann Diels. However useful the so-called Diels has been and still is, it is now in need of a thorough revision. The present five-tome set is a first step in that direction. Tome 1 offers a reproduction of Diels’ catalogue with an index of the manuscripts. The following three tomes provide a reconstruction of the texts contained in the manuscripts listed in Diels on the basis of Diels’ catalogue. Proceeding as Diels did, these three tomes distinguish the manuscripts containing texts by (or attributed to) Hippocrates (tome 2), Galen (tome 3), and the other authors considered by Diels (tome 4). Tome 5 will list all the texts listed in Diels for each manuscript in the catalogue. The present work will be a reference for all scholars interested in Greek medical literature and manuscripts, in addition to historians of medicine, medical book, medical tradition, and medical culture.

Tome 5: The Manuscripts and their Texts