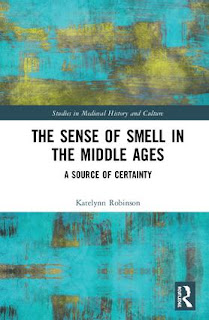 The Sense of Smell in the Middle Ages. A Source of Certainty


Odors, including those of incense, spices, cooking, and refuse, were both ubiquitous and meaningful in central and late medieval Western Europe. The significance of the sense of smell is evident in scholastic Latin texts, most of which are untranslated and unedited by modern scholars. Between the late eleventh and thirteenth centuries, medieval scholars developed a logical theory of the workings of the sense of smell based on Greek and Arabic learning. In the thirteenth through fifteenth centuries, medical authors detailed practical applications of smell theory and these were communicated to individuals and governing authorities by the medical profession in the interests of personal and public health. At the same time, religious authors read philosophical and medical texts and gave their information religious meaning. This reinterpretation of scholastic philosophy and medicine led to the development of what can be termed a medically-aware theology of smell that was communicated to popular audiences alongside traditional olfactory theory in sermons. Its impact on popular thought is reflected in late medieval mystical texts. While the senses have received increasing scholarly attention in recent decades this volume presents the first detailed research into the sense of smell in the later European Middle Ages
Publié par Alexandre Klein à 06:04