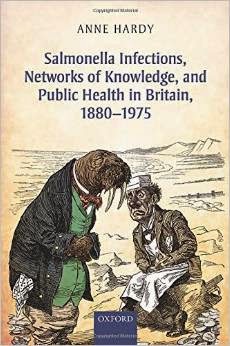 Salmonella Infections, Networks of Knowledge, and Public Health in Britain, 1880-1975

Salmonella infections were the most significant food poisoning organisms affecting human and animal health across the globe for most of the twentieth century. In this pioneering study, Anne Hardy uncovers the discovery of food poisoning as a public health problem and of Salmonella as its cause. She demonstrates how pathways of infection through eggs, flies, meat, milk, shellfish, and prepared foods were realised, and the roles of healthy human and animal carriers understood. This volume takes us into the world of the laboratories where Salmonella and their habits were studied - a world with competing interests, friendships, intellectual agreements and disagreements - and describes how the importance of different strains of these bacteria and what they showed about agricultural practices, global trade, and modern industrial practices came to be understood. Finally, Hardy takes us from unhygienic practice on fields and farms, to crucial sites of bacterial exchange in slaughterhouse and kitchen, where infections like Salmonella and Campylobacter enter the human food chain, and where every cook can make the difference between well-being and suffering in those whom they feed. This history is based on a case-study of the British experience, but it is set in the context of today's immense global problem of food-borne disease which affects all human societies, and is one of the most urgent and important problems in global public health.
Publié par Alexandre Klein à 06:07