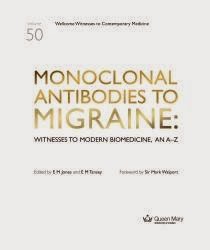 Monoclonal Antibodies to Migraine: Witnesses to Modern Biomedicine, an A–Z

The History of Modern Biomedicine Research Group hosted its first Witness Seminar, on monoclonal antibodies, in 1993. Since then more than sixty such meetings have been held, the most recent on migraine in 2013. These all sought to go behind-the-scenes of contemporary biomedicine to find out ‘what really happened’.

In this, the Group’s twenty-first anniversary year, we are delighted to present our fiftieth Witness Seminar volume Monoclonal Antibodies to Migraine: Witnesses to modern biomedicine, an A–Z. Comprising a series of extracts from previous volumes, contributors include clinicians, scientists, patients and numerous others involved in modern biomedicine, in the UK and beyond. Topics range from ‘age discrimination’ to ‘Zantac’, and feature memories from every decade between 1930s and the present.