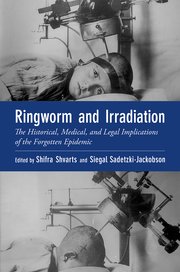 Ringworm and Irradiation. The Historical, Medical, and Legal Implications of the Forgotten Epidemic


Ringworm and Irradiation: The Historical, Medical, and Legal Implications of the Forgotten Epidemic explores the history of the disease and the use of irradiation for the treatment of ringworm, an epidemic that was spread mainly among poor children in countries across the world in the first half of the 20th century.

At its peak in the 1940 and 50s, children around the globe were treated with radiation therapy to prevent and eradicate ringworm of the scalp, a treatment that led years later to latent health risk to develop tumors, malignancies, thyroid cancer, brain tumors, and other health effects among the exposed population. The actions taken by the National Cancer Institute (NCI) and the US Food and Drug Administration to launch a nationwide campaign warning the public, and thus the medical community, about the late health effects of ionizing radiation received in childhood are evidenced in this compilation.