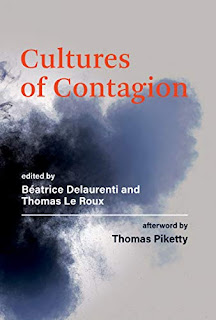 
Cultures of Contagion recounts episodes in the history of contagions, from ancient times to the twenty-first century. It considers contagion not only in the medical sense but also as a process, a metaphor, and an interpretive model--as a term that describes not only the transmission of a virus but also the propagation of a phenomenon. The authors describe a wide range of social, cultural, political, and anthropological instances through the prism of contagion--from anti-Semitism to migration, from the nuclear contamination of the planet to the violence of Mao's Red Guard.

The book proceeds glossary style, with a series of short texts arranged alphabetically, beginning with an entry on aluminum and "environmental contagion" and ending with a discussion of writing and "textual resemblance" caused by influence, imitation, borrowing, and plagiarism. The authors--leading scholars associated with the Center for Historical Research (CRH, Centre de recherches historiques), Paris--consider such topics as the connection between contagion and suggestion, "waltzmania" in post-Terror Paris, the effect of reading on sensitive imaginations, and the contagiousness of yawning. They take two distinct approaches: either examining contagion and what it signified contemporaneously, or deploying contagion as an interpretive tool. Both perspectives illuminate unexpected connections, unnoticed configurations, and invisible interactions.