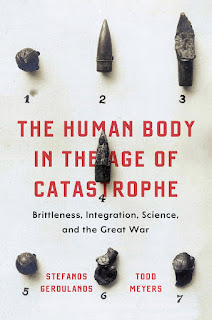 The Human Body in the Age of Catastrophe. Brittleness, Integration, Science, and the Great War

The injuries suffered by soldiers during WWI were as varied as they were brutal. How could the human body suffer and often absorb such disparate traumas? Why might the same wound lead one soldier to die but allow another to recover?
In The Human Body in the Age of Catastrophe, Stefanos Geroulanos and Todd Meyers uncover a fascinating story of how medical scientists came to conceptualize the body as an integrated yet brittle whole. Responding to the harrowing experience of the Great War, the medical community sought conceptual frameworks to understand bodily shock, brain injury, and the wildly divergence between patients. Geroulanos and Meyers carefully trace how this emerging constellation of concepts became essential for thinking about integration, individuality, fragility, and collapse far beyond medicine: in fields as diverse as anthropology, political economy, psychoanalysis, and cybernetics.
Moving effortlessly between the history of medicine and intellectual history, The Human Body in the Age of Catastrophe is an intriguing look into the conceptual underpinnings of the world the Great War ushered in.
Publié par Alexandre Klein à 06:02