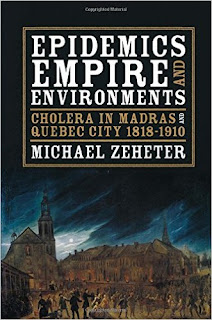 Epidemics, Empire, and Environments: Cholera in Madras and Quebec City, 1818–1910

Throughout the nineteenth century, cholera was a global scourge against human populations. Practitioners had little success in mitigating the symptoms of the disease, and its causes were bitterly disputed. What experts did agree on was that the environment played a crucial role in the sites where outbreaks occurred. In this book, Michael Zeheter offers a probing case study of the environmental changes made to fight cholera in two markedly different British colonies: Madras in India and Quebec City in Canada.
The colonial state in Quebec aimed to emulate British precedent and develop similar institutions that allowed authorities to prevent cholera by imposing quarantines and controlling the disease through comprehensive change to the urban environment and sanitary improvements. In Madras, however, the provincial government sought to exploit the colony for profit and was reluctant to commit its resources to measures against cholera that would alienate the city’s inhabitants. It was only in 1857, after concern rose in Britain over the health of its troops in India, that a civilizing mission of sanitary improvement was begun. As Zeheter shows, complex political and economic factors came to bear on the reshaping of each colony's environment and the urgency placed on disease control.
Publié par Alexandre Klein à 06:27