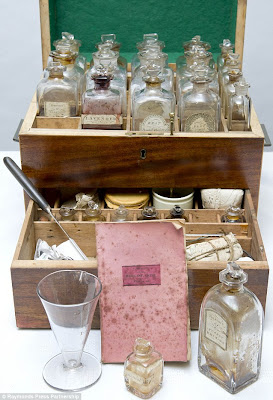 Turkey rhubarb with a dash of laudanum, anyone? Medicine chest 'time capsule' that reveals the exotic potions used by doctors in 1817 goes on sale


It contains a collection of healing potions and cure-alls unlikely to be prescribed by any GP today.
But a perfectly preserved medicine chest dating back to the reign of George III is expected to fetch more than £3,000 when it sells at auction later this week.
The mahogany box, described as a 'medicinal time capsule', comes complete with 29 exotically named bottled concoctions that would have been used by doctors to treat ailments such as gout, depression and indigestion.

However, the likes of Laudanum - described in an accompanying handbook as 'as one of the most valuable medicines afflicted with mankind' - are now strictly controlled.
This is not that surprising as Laudanum, an alcoholic herb preparation, contains opium.
Other remedies popular in 1817, when the chest was made up, such as Turkey rhubarb (a plant thought to have healing properties), and cream of tartar (a byproduct of winemaking that was used as a laxative), have long since been replaced by more modern medicines.

The chest was discovered in a house in Derbyshire.
Auctioneer Charles Hanson, who will oversee its sale in Derby on Saturday, said it may have been used out of hours by a doctor on call, or owned by the family of a large country house to carry with them on a long journey by horse and carriage.
Mr Hanson, who has appeared on BBC1’s Bargain Hunt, added: 'It would appear the chest, which dates back to the early 19th century, has been untouched for almost 200 years.
'It is wonderfully complete. It even has its original companion instruction book on how to apply the medicinal potions in the glass bottles, and what they may cure.
'I suspect the box was only used once or twice to administer medicines and has then been hidden away in an old country attic or cellar for almost two centuries.'
As well as the bottled medicines, the chest also contains a complete set of utensils including scales, mixing bowls and a scalpel.
Mr Hanson said: 'The bottles are a variety of colour, with liquid and solid contents from the Georgian period still visible.
'It is a medicine chest far removed from today’s practising doctors.'
The handbook claims that 'diseases which threaten the most fatal consequences may be averted or subdued by the exercise of good sense and prudence and by timely recourse to the medicine chest'.
It adds that the medicines 'are of the best quality and are selected for their efficacy. The doses are in general smaller than professional men might deem necessary'.
The booklets also contains a description of each remedy, and what it should be used for.

It states that 'Turkey rhubarb is an admirable medicine for disorder of the bowel. The dose is ten to thirty grains mixed with peppermint water.'
A bottle of Laudanum in the chest 'seldom fails to occasion a calmness and quietude in the system whence its use in gout and spasmodic disorders', according to the guide.

And a teaspoonful of ‘spirit of lavender’ is 'useful for cases of depression, sickness and languor'.
The chest was made up a year before the first successful blood transfusion, and 30 years before the first painless surgery with general anaesthetic.
It wasn’t until 1870, 53 years later, that Louis Pasteur and Robert Koch established that germs - and not miasma, or ‘bad air’ - caused diseases, leading to important innovations such as antibiotics and hygiene practices.
Mr Hanson said: 'The chest is a time capsule from the very early 19th century when medical advances were on the threshold.
'I hope it is purchased by a doctor or medical professional who can appreciate how far we have come in the last 195 years!'
The chest will be sold at Hansons Auctioneers in a fine art sale at their showroom in Etwall, Derby.