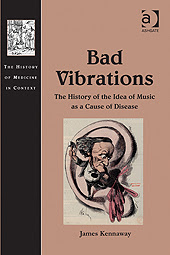 Music has been used as a cure for disease since as far back as King David's lyre, but the notion that it might be a serious cause of mental and physical illness was rare until the late eighteenth century. At that time, physicians started to argue that excessive music, or the wrong kind of music, could over-stimulate a vulnerable nervous system, leading to illness, immorality and even death. Since then there have been successive waves of moral panics about supposed epidemics of musical nervousness, caused by everything from Wagner to jazz and rock 'n' roll. It was this medical and critical debate that provided the psychiatric rhetoric of "degenerate music" that was the rationale for the persecution of musicians in Nazi Germany and the Soviet Union. By the 1950s, the focus of medical anxiety about music shifted to the idea that "musical brainwashing" and "subliminal messages" could strain the nerves and lead to mind control, mental illness and suicide. More recently, the prevalence of sonic weapons and the use of music in torture in the so-called War on Terror have both made the subject of music that is bad for the health worryingly topical.
This book outlines and explains the development of this idea of pathological music from the Enlightenment until the present day, providing an original contribution to the history of medicine, music and the body.

About the Author: James Kennaway is a historian of medicine, with a joint appointment in the Department of Philosophy and the School of Medicine and Health at Durham University. He specializes in the relationship between music, aesthetics and the body, with broad research interests in the history of physical and mental illness.