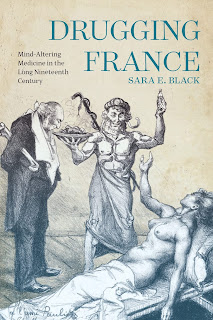 In the nineteenth century, drug consumption permeated French society to produce a new norm: the chemical enhancement of modern life. French citizens empowered themselves by seeking pharmaceutical relief for their suffering and engaging in self-medication. Doctors and pharmacists, meanwhile, fashioned themselves as gatekeepers to these potent drugs, claiming that their expertise could shield the public from accidental harm. Despite these efforts, the unanticipated phenomenon of addiction laid bare both the embodied nature of the modern self and the inherent instability of the notions of individual free will and responsibility. Drugging France explores the history of mind-altering drugs in medical practice between 1840 and 1920, highlighting the intricate medical histories of opium, morphine, ether, chloroform, cocaine, and hashish. While most drug histories focus on how drugs became regulated and criminalized as dangerous addictive substances, Sara Black instead traces the spread of these drugs through French society, demonstrating how new therapeutic norms and practices of drug consumption transformed the lives of French citizens as they came to expect and even demand pharmaceutical solutions to their pain. Through self-experimentation, doctors developed new knowledge about these drugs, transforming exotic botanical substances and unpredictable chemicals into reliable pharmaceutical commodities that would act on the mind and body to modify pain, sensation, and consciousness. From the pharmacy counter to the boudoir, from the courtroom to the operating theatre, from the battlefield to the birthing chamber, Drugging France explores how everyday encounters with drugs reconfigured how people experienced their own minds and bodies.