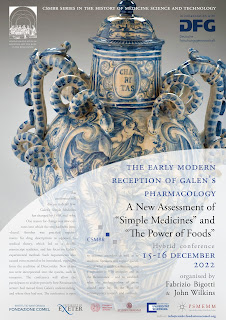 The Early Modern Reception of Galen's Pharmacology. A New Assessment of "Simple Medicines" and "The Powers of Foods"

Jointly sponsored by the Deutsche Forschungsgemeinschaft (DFG) and the Centre for the Study of Medicine and the Body in the Renaissance (CSMBR) The conference will focus on the early modern reception of Galenic pharmacology, and especially on works such as De simplicium medicamentorum temperamentis ac facultatibus and De alimentorum facultatibus.

Transmitted through the centuries in Greek, Persian, Arabic and then Latin translations, these texts have constituted the bedrock on which Western pharmacology was built. Along with Dioscorides, Galen represented the main source for the theorisation of the action of simples on the body. His works offered a systematic analysis of the properties of plants, minerals and animal products and their effects on the human body and contain what is possibly the first attempt at theorising the intensive spectrum of simples and foods in relation to the time taken to react within the body.


Over the past few years a variety of contributions have been devoted to Galen’s pharmacology, especially by Armelle Debru (Galen on Pharmacology, 1995), Sabine Vogt (Drugs and Pharmacology in the Cambridge Companion to Galen, 2008), Caroline Petit (Galen, Pharmacology and the Boundaries of Medicine: A Reassessment in Collecting Recipies. Byzantine and Jewish Pharmacology in Dialogue, 2017), Iolanda Ventura (Galen’s Pharmacology in the Middle Ages, in Brill’s Companion to the Reception of Galen, 2019) and others, which add substantially to our understanding of Galenic pharmacology. These complement the classical contribution of Michael R. McVaugh on the development of drug theory and intensity of substances at Montepellier and in Arnauld of Villanova. Despite this, an overall approach to early modern Galenic pharmacology is still lacking, especially with regards to the intensity and action of substances on the body, which during the Renaissance witnessed a substantial development, both in terms of visualisation and quantification of drugs and foods properties.

Thus, the conference aims at addressing aspects of Galen’s pharmacology in relation to the philosophical, cultural and social development it underwent in the early modern period. Most notably, it will discuss in detail how Galen’s Simple Medicines had changed by 1500, and why. One reason for change was the new cultures into which the text had been introduced. Another was practical requirements for drug descriptions as opposed to medical theory, which led to a double manuscript tradition, and less focus on Galen’s experimental method. Such requirements also caused extra material to be introduced, especially from the tradition of Dioscorides. New plants too were incorporated into the system, such as tomatoes, which required accurate description and classification. In short, the early modern period faced a crisis over how to handle the power of new foods and drugs that were then imported and commercialised from the new continent, a crisis that physicians and natural philosophers sought to resolve by creating new conceptual, visual and technical instruments.

The conference will hence allow the participants to analyse how Renaissance writers had moved on from Galen’s understanding, as well as where and why they had not. Speakers will be looking at translations and how these reflect different approaches and/or traditions. Theories of action of drugs on the body will also be taken into account, viz. how these were modified in relation to Arabic pharmacology. A special emphasis will be laid on how plants were classified and visualised. Finally, attention will be devoted to the commercialisation of drugs, simples and recipes as developed within Galenic therapy.

Questions of what a quality, a humour, and a substance is – in antiquity and in the Renaissance – and to establish what the understanding of them should now be, in the light of contemporary research and methods.

Funds for this conference have been provided by the Deutsche Foschungsgemeinschaft (DFG) under the project Measuring the World by Degrees. Intensity in Early Modern Medicine and Natural Philosophy 1400-1650 (Grant no: 461231785) awarded to Dr Fabrizio Bigotti in 2022.

Info and registration are available at: https://csmbr.fondazionecomel.org/events/conferences-webinars/em-galens-pharmacology/