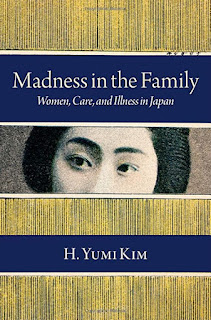 Madness in the Family: Women, Care, and Illness in Japan

To fend off American and European imperialism in the nineteenth century, Japan strove to strengthen itself by drawing on the most updated ideas and practices from around the world. By the 1880s, this included the introduction of Western-derived psychiatry and its ideas about mental illness. The first Japanese psychiatrists claimed that mental illnesses required medical treatment in specialized institutions rather than confinement at home, as had been common practice. Yet the state implemented no social welfare policies to make new medical services more accessible and affordable to the public. The family, especially women, thus continued to carry the burden of caring for those considered mad.

Madness in the Family examines how the family in Japan came to be seen as the natural provider of care for those suffering from mental illnesses. It centers on the experiences of women and families, which have long been obscured by the voices of male psychiatrists, state officials, and lawmakers. H. Yumi Kim traces how women and families negotiated a dizzying array of claims about madness and its proper management across various settings. In the countryside, psychiatrists tried to refute the notion that fox spirits could cause madness, and the government regulated the use of cage-like structures inside homes. In cities, a booming medical marketplace spread ideas about feminized illnesses such as hysteria, and female defendants were evaluated for menstruation-induced disorders. As women and families navigated this shifting therapeutic landscape, they produced their own gendered approaches to madness that would take precedence over the claims of psychiatry, the law, and the state in everyday life.

Decoupling the history of mental illness from the discipline and institutions of psychiatry, Madness in the Family reveals the power and fragilities of gender, kinship, and care in the creation of different modes of caring for and understanding mental illness that persist to this day.