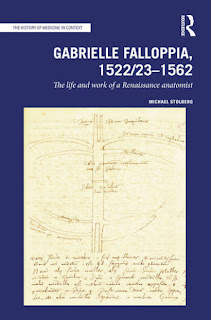 Renaissance anatomist Gabrielle Falloppia is best known today for his account of the eponymous fallopian tubes but he made numerous other anatomical discoveries as well, was one of the most famous surgeons of his time, and is widely believed to have invented the condom.

Drawing on Falloppia's Observationes anatomicae of 1561 and on dozens of handwritten and published sets of student notes, this book not only looks at Falloppia’s anatomical lectures and demonstrations. It also studies Falloppia’s work on surgical topics – including the French disease and cosmetic surgery – on thermal waters, and on pharmacology. Last but not least, it uses student notes and the letters of contemporary scholars to throw a new light on Falloppia’s biography, on his very special relationship with the botanist Melchior Wieland, who lived in his house for several years, and on his conflicts with his fellow professors in Padua, one of whom, Bassiano Landi, was murdered just ten days after his funeral – by Falloppia’s disciples, as some believed.

Written by one of the leading scholars in the field of early modern medicine, this book will appeal to all those interested in the teaching and practice of anatomy, surgery, and pharmacology in the Renaissance.
Publié par Alexandre Klein à 06:29