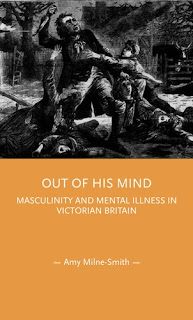 Out of his mind. Masculinity and mental illness in Victorian Britain


Out of His Mind interrogates how Victorians made sense of the madman as both a social reality and a cultural representation. Even at the height of enthusiasm for the curative powers of nineteenth-century psychiatry, to be certified as a lunatic meant a loss of one's freedom and in many ways one's identify. Because men had the most power and authority in Victorian Britain, this also meant they had the most to lose. The madman was often a marginal figure, confined in private homes, hospitals, and asylums. Yet as a cultural phenomenon he loomed large, tapping into broader social anxieties about respectability, masculine self-control, and fears of degeneration. Using a wealth of case notes, press accounts, literature, medical and government reports, this text provides a rich window into public understandings and personal experiences of men's insanity.