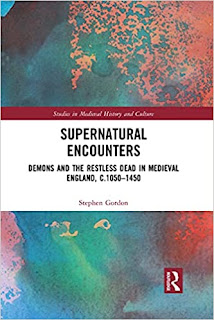 The belief in the reality of demons and the restless dead formed a central facet of the medieval worldview. Whether a pestilent-spreading corpse mobilised by the devil, a purgatorial spirit returning to earth to ask for suffrage, or a shape-shifting demon intent on crushing its victims as they slept, encounters with supernatural entities were often met with consternation and fear. Chroniclers, hagiographers, sermon writers, satirists, poets, and even medical practitioners utilised the cultural ‘text’ of the supernatural encounter in many different ways, showcasing the multiplicity of contemporary attitudes to death, disease, and the afterlife. In this volume, Stephen Gordon explores the ways in which conflicting ideas about the intention and agency of supernatural entities were understood and articulated in different social and literary contexts. Focusing primarily on material from medieval England, c.1050–1450, Gordon discusses how writers such as William of Malmesbury, William of Newburgh, Walter Map, John Mirk, and Geoffrey Chaucer utilised the belief in demons, nightmares, and walking corpses for pointed critical effect. Ultimately, this monograph provides new insights into the ways in which the broad ontological category of the ‘revenant’ was conceptualised in the medieval world.
Publié par Alexandre Klein à 06:07