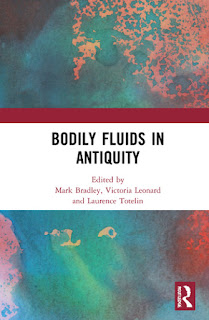 From ancient Egypt to Imperial Rome, from Greek medicine to early Christianity, this volume examines how human bodily fluids influenced ideas about gender, sexuality, politics, emotions, and morality, and how those ideas shaped later European thought.

Comprising 25 chapters across seven key themes – language, gender, eroticism, nutrition, dissolution, death, and afterlife – this volume investigates bodily fluids in the context of the current sensory turn. It asks fundamental questions about physicality and fluidity: how were bodily fluids categorised and differentiated? How were fluids trapped inside the body perceived, and how did this perception alter when those fluids were externalised? Do ancient approaches complement or challenge our modern sensibilities about bodily fluids? How were religious practices influenced by attitudes towards bodily fluids, and how did religious authorities attempt to regulate or restrict their appearance? Why were some fluids taboo, and others cherished? In what ways were bodily fluids gendered? Offering a range of scholarly approaches and voices, this volume explores how ideas about the body and the fluids it contained and externalised are culturally conditioned and ideologically determined. The analysis encompasses the key geographic centres of the ancient Mediterranean basin, including Greece, Rome, Byzantium, and Egypt. By taking a longue durée perspective across a richly intertwined set of territories, this collection is the first to provide a comprehensive, wide-ranging study of bodily fluids in the ancient world.

Bodily Fluids in Antiquity will be of particular interest to academic readers working in the fields of classics and its reception, archaeology, anthropology, and ancient to early modern history. It will also appeal to more general readers with an interest in the history of the body and history of medicine.