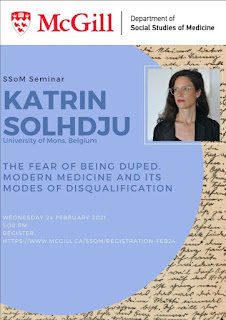 The Fear of Being Duped. Modern Medicine and its Modes of Disqualification.
Talk by Katrin Solhdju
Wednesday 24 February 2021
1:00 PM
https://www.mcgill.ca/ssom/registration-feb24
Abstract: In The Will to Believe (1896), the pragmatist philosopher William James asserts the following: “Science”, he writes, “has organized its nervousness of being duped ‘into a regular technique, the so-called method of verification, and she has fallen so deeply in love with the method that we may even say she has ceased to care for the truth by itself at all’.” It seems to me that this diagnosis is particularly to the point with respect to modern medicine, which since its historical beginnings has constituted itself in opposition to practices henceforth (dis)qualified as charlatanism. With my lecture, I would like to raise awareness for the various modalities that procedures of disqualification have taken on in the field of disease, health, and healing – historically and until today. The hypothesis I would like to pursue, taking up James’ diagnosis, is that the readiness and apparent necessity for disqualifying others and their (therapeutic) practices has all too often been nourished by a fear of being duped rather than by an earnest ‘care for the truth itself ’. Where does this fear stem from and what are its characteristics? Could it be interpreted as being one of the constitutive motors for epistemic injustices to persist, and of our difficulties to think beyond them? And if so, what would be required in order for us to begin taming the destructive effects of this fear?
Publié par Alexandre Klein à 05:59