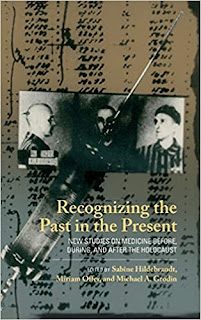 Recognizing the Past in the Present: New Studies on Medicine before, during, and after the Holocaust

Following decades of silence about the involvement of doctors, medical researchers and other health professionals in the Holocaust and other National Socialist (Nazi) crimes, scholars in recent years have produced a growing body of research that reveals the pervasive extent of that complicity. This interdisciplinary collection of studies presents documentation of the critical role medicine played in realizing the policies of Hitler’s regime. It traces the history of Nazi medicine from its roots in the racial theories of the 1920s, through its manifestations during the Nazi period, on to legacies and continuities from the postwar years to the present.