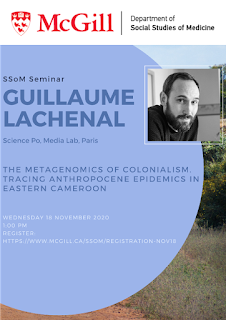 Hosted on Zoom - Link will be sent via e-mail

Registration will remain open until 4 PM on Tuesday 17 November

My paper establishes a conversation between STS, colonial history and molecular epidemiology. Recent progress in molecular phylogeny have given epidemiologists and historians extraordinary new tools to trace epidemics – both in real- and deep-time, across multi-specifies ecologies. My paper, based on historical and ethnographic fieldwork research conducted over 10 years in East Cameroon, deploys a “bio-historical” approach to explore the mutating ecologies of a region known as a “hotspot” of disease emergence. Focusing on the enmeshed histories of HIV, HCV, trypanosomiasis and mycobacterial infections, my aim is to offer a new perspective, beyond classic narratives describing (and anticipating) emergence as the result of pathological transgressions – of species barriers and of political borders. Firstly, I propose to recast the apparently exceptional history of HIV in a much wider ecological crisis which began in the late 19th century with the colonial rubber boom, and which led to the emergence of multiple pathogens (including trypanosomes, Hepatitis C virus and mycobacterias). Drawing from a neglected mid-century tradition of tropical biogeography (Maximilian Sorre’s “pathogen complex”), and from recent advances in metagenomics, I will show how theses pathogenic collectives can be understood as ruins of colonialism and capitalism: as biological traces of the central-African Anthropocene.
Publié par Alexandre Klein à 06:01