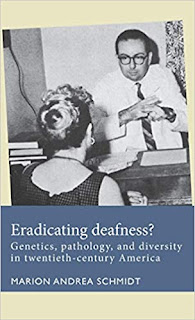 
Is deafness a disability to be prevented or the uniting trait of a cultural community to be preserved? Combining the history of eugenics and genetics with deaf and disability history, this book traces how American heredity researchers moved from trying to eradicate deafness to embracing it as a valuable cultural diversity. It looks at how deafness came to be seen as a hereditary phenomenon at all, how eugenics became part of progressive reform at schools for the deaf, and how, from the 1950s on, more sociocultural approaches to disability and minority led to new cooperative projects between professionals and local signing deaf communities. Analysing the transformative effects of exchange between researchers and objects of research, this book offers new insight to changing ideas about medical ethics, reproductive rights, the meaning of scientific progress and cultural diversity.
Publié par Alexandre Klein à 06:08