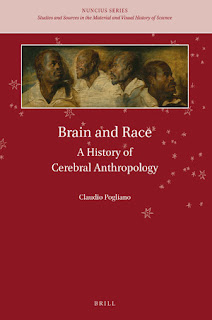 Brain and Race. A History of Cerebral Anthropology

Claudio Pogliano
Brill
Series: Nuncius Series, Volume: 4
Publication Date: 04 Jun 2020
ISBN: 978-90-04-42933-8
Since the second half of the eighteenth century, generations of scientists persisted in studying the relationships between the volume, weight or shape of the human brain and the degree of ‘intelligence’. In Pogliano’s book, the thread of time drives the narrative up to the mid-twentieth century. It investigates the duration and changes of a game that was intrinsically political, although having to do with bones and nervous matter. Races made its main object, during a long period when Western culture believed the human species to be naturally partitioned into a number of discrete types, with their innate and hereditary traits. Never leading to irrefutable achievements, the polycentric (as well as visual) enterprise herein described is full of growing tensions, doubts, and disillusionment.
Publié par Alexandre Klein à 06:09