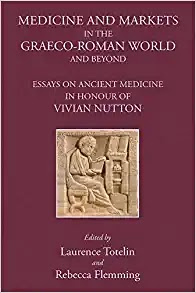 Medicine and Markets in the Graeco-roman World and Beyond: Essays on Ancient Medicine in Honour of Vivian Nutton

For almost half a century, Vivian Nutton has been a leading figure in the study of ancient (and less ancient) medicine. The field itself has been revolutionised over that time. In this volume distinguished colleagues and former students develop, in his honour, key themes of his ground-breaking scholarship. Spanning from the Bronze Age to the Digital Age, involving the cult of Artemis and the corpuscular theories of Asclepiades of Bithynia, the medicinal uses of beavers and the cost of health-care and wet-nursing, case-histories, remedy exchange and the medical repercussions of political assassination, this book has at its centre the pluralism and diversity of the ancient medical marketplace. The lively interplay between choice and competition, unity and division, communication and debate, so notable in Vivian Nutton's foundational vision of the world of classical medicine, is richly examined across these pages.
Publié par Alexandre Klein à 06:09