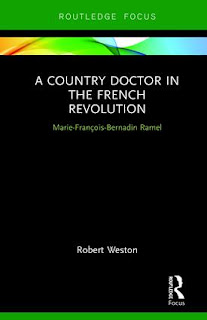 A Country Doctor in the French Revolution. Marie-François-Bernadin Ramel

This book will be of interest to those studying French medical and Revolutionary history. It traces the life of an early-modern rural French physician from childhood to death — how he worked as a physician for six years in North Africa (taking a particular interest in medical meteorology); sought to establish himself as a savant in the Republic of Letters by publishing texts and prize-winning essays; and, despite his bourgeois roots, took part in the siege of Toulon, became committed to the ideals of the French Revolution, and volunteered for the Revolutionary armée d’Italie, mainly working in military hospitals. It concludes with an account of his time practicing medicine in southwest France, where he also engaged in local politics, eventually being appointed to a mayoral position by Bonaparte.
Publié par Alexandre Klein à 06:03