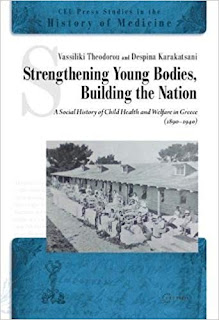 Strengthening Young Bodies, Building a Nation: The Social History of the Child Health Welfare in Greece (1890–1940)

Stimulated by the development of both childhood studies and the social history of medicine, this book contextualizes the historical circumstances that led to the medicalization of childhood in Greece from the end of the nineteenth century until World War II. By examining this issue in the span of fifty years, the authors explore how the national question was entwined with concerns raised about the health of children. They also investigate the various connotations that child health and maternity care carried in the context of liberal and authoritarian governments as well as the wider social and cultural changes that took place during this period. Drawing upon a wide array of primary and secondary sources, they look into the role the initiatives of doctors, social thinkers and state functionaries played in shaping health policy; the impact of medical elites from the western European paradigm; and the gradual professionalization of health care in Greece. The main findings of the analysis regard the ever growing intervention of the state in the medical supervision of childhood, the particular relationship between the philanthropic organizations and the state, as well as the impact the national rivalries and wars had on the intensification of the attempts undertaken for the amelioration of the health of the younger generation.
Publié par Alexandre Klein à 06:02