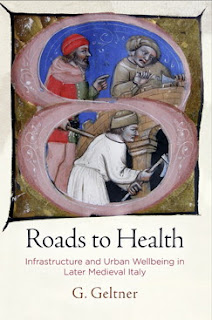 
In Roads to Health, G. Geltner demonstrates that urban dwellers in medieval Italy had a keen sense of the dangers to their health posed by conditions of overcrowding, shortages of food and clean water, air pollution, and the improper disposal of human and animal waste. He consults scientific, narrative, and normative sources that detailed and consistently denounced the physical and environmental hazards urban communities faced: latrines improperly installed and sewers blocked; animals left to roam free and carcasses left rotting on public byways; and thoroughfares congested by artisanal and commercial activities that impeded circulation, polluted waterways, and raised miasmas. However, as Geltner shows, numerous administrative records also offer ample evidence of the concrete measures cities took to ameliorate unhealthy conditions. Toiling on the frontlines were public functionaries generally known as viarii, or "road-masters," appointed to maintain their community's infrastructures and police pertinent human and animal behavior. Operating on a parallel track were the camparii, or "field-masters," charged with protecting the city's hinterlands and thereby the quality of what would reach urban markets, taverns, ovens, and mills.

Roads to Health provides a critical overview of the mandates and activities of the viarii and camparii as enforcers of preventive health and safety policies between roughly 1250 and 1500, and offers three extended case studies, for Lucca, Bologna, and the smaller Piedmont town of Pinerolo. In telling their stories, Geltner contends that preventive health practices, while scientifically informed, emerged neither solely from a centralized regime nor as a reaction to the onset of the Black Death. Instead, they were typically negotiated by diverse stakeholders, including neighborhood residents, officials, artisans, and clergymen, and fostered throughout the centuries by a steady concern for people's greater health.

G. Geltner is Professor of History at the University of Amsterdam and author of several books including The Making of Medieval Antifraternalism: Polemic, Violence, Deviance, and Remembrance, The Medieval Prison: A Social History, and Flogging Others: Corporal Punishment and Cultural Identity from Antiquity to the Present.
Publié par Alexandre Klein à 06:00