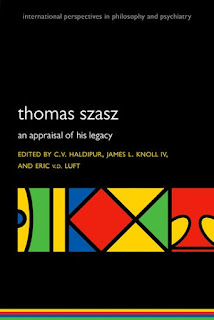 Thomas Szasz: An Appraisal of His Legacy

C.V. Haldipur, James L. Knoll, IV, and Eric v.d. Luft, have written what might be considered, in the best sense of the term, an encyclopedia of the work of Thomas Szasz. They have compiled an extraordinary group of psychiatrists, philosophers, ethicists, social scientists, researchers, humanists, and forensic experts—many who knew Dr Szasz personally or who had debated him in public or on paper, or both. Yet this edited compilation is not hagiography; instead, it is a penetrating, deep, and intrepid exploration of Szasz’s oeuvre, and the indelible impact he has had on the practice of psychiatry, in this country and abroad. Even if younger members of my profession (and philosophers of history and science), do not know his work, they live under its long and fulsome shadow.

Szasz’s intellectual tools were history, philosophical argument, ethics, logic, and humanism. He was a master at demonstrating how metaphor can take on the power of fact, and how it was used in ways that could erode liberty. The most renown, and enduring, of his metaphors is the “myth of mental illness.” His work in the book so titled, and some 30 volumes and hundreds of papers that followed, brought him the mantle of being “anti-psychiatry.” But he was not; he was a libertarian who held the importance of freedom over everything else (and he was clear to also say that with liberty came personal responsibility).