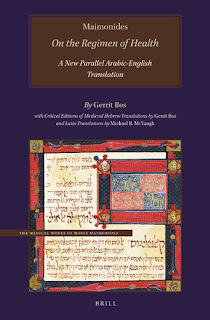 Maimonides On the Regimen of Health. A New Parallel Arabic-English Translation


Maimonides’ On the Regimen of Health was composed at an unknown date at the request of al-Malik al-Afḍal Nūr al-Dīn Alī, Saladin’s eldest son who complained of constipation, indigestion, and depression. The treatise must have enjoyed great popularity in Jewish circles, as it was translated three times into Hebrew as far as we know; by Moses ben Samuel ibn Tibbon in the year 1244, by an anonymous translator, and by Zeraḥyah ben Isaac ben She’altiel Ḥen who was active as a translator in Rome between 1277 and 1291. The present edition by Gerrit Bos contains the original Arabic text, the medieval Hebrew translations and the Latin translations, the latter edited by Michael McVaugh. See Less