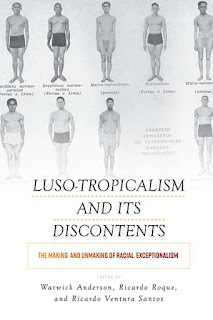 Luso-Tropicalism and Its Discontents. The Making and Unmaking of Racial Exceptionalism


Modern perceptions of race across much of the Global South are indebted to the Brazilian social scientist Gilberto Freyre, who in works such as The Masters and the Slaves claimed that Portuguese colonialism produced exceptionally benign and tolerant race relations. This volume radically reinterprets Freyre’s Luso-tropicalist arguments and critically engages with the historical complexity of racial concepts and practices in the Portuguese-speaking world. Encompassing Brazil as well as Portuguese-speaking societies in Africa, Asia, and even Portugal itself, it places an interdisciplinary group of scholars in conversation to challenge the conventional understanding of twentieth-century racialization, proffering new insights into such controversial topics as human plasticity, racial amalgamation, and the tropes and proxies of whiteness.

Warwick Anderson is the Janet Dora Hine Professor of Politics, Governance and Ethics in the Department of History and the Charles Perkins Centre at the University of Sydney. He is the author of The Cultivation of Whiteness (2002), Colonial Pathologies (2006), The Collectors of Lost Souls (2008), and with Ian R. Mackay, Intolerant Bodies (2014).

Ricardo Roque is a Research Fellow at the Institute of Social Sciences of the University of Lisbon and currently an Honorary Associate in the Department of History of the University of Sydney. He is the author of Headhunting and Colonialism (2010) and the co-editor of Engaging Colonial Knowledge (2012).

Ricardo Ventura Santos is a Senior Researcher at Fundação Oswaldo Cruz and Professor at the Department of Anthropology of the National Museum, in Rio de Janeiro. He is the author of The Xavante in Transition (2002) and co-editor of Racial Identities, Genetic Ancestry, and Health in South America (2011) and Mestizo Genomics (2014).
Publié par Alexandre Klein à 06:04