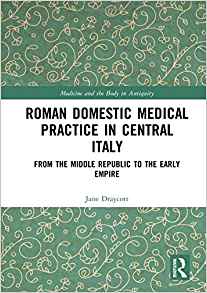 Roman Domestic Medical Practice in Central Italy: From the Middle Republic to the Early Empire

Roman Domestic Medical Practice in Central Italy examines the roles that the home, the garden and the members of the household (freeborn, freed and slave) played in the acquisition and maintenance of good physical and mental health and well-being. Focussing on the period from the middle Republic to the early Empire, it considers how comprehensive the ancient Roman general understanding of health actually was, and studies how knowledge regarding various aspects of health was transmitted within the household.

Using literary, documentary, archaeological and bioarchaeological evidence from a variety of contexts, this is the first extended volume to provide as comprehensive and detailed a reconstruction of this aspect of ancient Roman private life as possible, complementing existing works on ancient professional medical practice and existing works on domestic medical practice in later historical periods. This volume offers an indispensable resource to social historians, particularly those that focus on the ancient family, and medical historians, particularly those that focus on the ancient world.
Publié par Alexandre Klein à 06:02