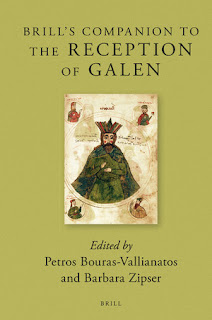 Brill's Companion to the Reception of Galen


Brill’s Companion to the Reception of Galen presents a comprehensive account of the afterlife of the corpus of the second-century AD Greek physician Galen of Pergamum. In 31 chapters, written by a range of experts in the field, it shows how Galen was adopted, adapted, admired, contested, and criticised across diverse intellectual environments and geographical regions, from Late Antiquity to the present day, and from Europe to North Africa, the Middle and the Far East.
The volume offers both introductory material and new analysis on the transmission and dissemination of Galen’s works and ideas through translations into Latin, Syriac, Arabic, Hebrew and other languages, the impact of Galenic thought on medical practice, as well as his influence in non-medical contexts, including philosophy and alchemy.
Publié par Alexandre Klein à 06:08