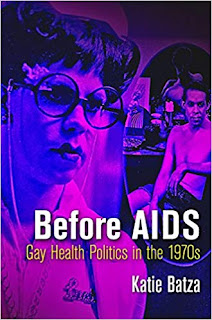 Before AIDS: Gay Health Politics in the 1970s

The AIDS crisis of the 1980s looms large in recent histories of sexuality, medicine, and politics, and justly so—an unknown virus without a cure ravages an already persecuted minority, medical professionals are unprepared and sometimes unwilling to care for the sick, and a national health bureaucracy is slow to invest resources in finding a cure. Yet this widely accepted narrative, while accurate, creates the impression that the gay community lacked any capacity to address AIDS. In fact, as Katie Batza demonstrates in this path-breaking book, there was already a well-developed network of gay-health clinics in American cities when the epidemic struck, and these clinics served as the first responders to the disease. Before AIDS explores this heretofore unrecognized story, chronicling the development of a national gay health network by highlighting the origins of longstanding gay health institutions in Boston, Chicago, and Los Angeles, placing them in a larger political context, and following them into the first five years of the AIDS crisis.

Like many other minority communities in the 1970s, gay men faced public health challenges that resulted as much from their political marginalization and social stigmatization as from any disease. Gay men mistrusted mainstream health institutions, fearing outing, ostracism, misdiagnosis, and the possibility that their sexuality itself would be treated as a medical condition. In response to these problems, a colorful cast of doctors and activists built a largely self-sufficient gay medical system that challenged, collaborated with, and educated mainstream health practitioners. Taking inspiration from rhetoric employed by the Black Panther, feminist, and anti-urban renewal movements, and putting government funding to new and often unintended uses, gay health activists of the 1970s changed the medical and political understandings of sexuality and health to reflect the new realities of their own sexual revolution.
Publié par Alexandre Klein à 06:05