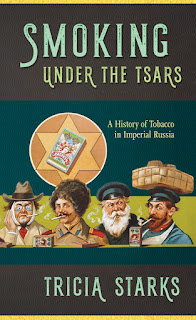 Smoking under the Tsars. A History of Tobacco in Imperial Russia

Approaching tobacco from the perspective of users, producers, and objectors, Smoking under the Tsars provides an unparalleled view of Russia’s early adoption of smoking. Tricia Starks introduces us to the addictive, nicotine-soaked Russian version of the cigarette—the papirosa—and the sensory, medical, social, cultural, and gendered consequences of this unique style of tobacco use.

Starting with the papirosa’s introduction in the nineteenth century and its foundation as a cultural and imperial construct, Starks situates the cigarette’s emergence as a mass-use product of revolutionary potential. She discusses the papirosa as a moral and medical problem, tracks the ways in which it was marketed as a liberating object, and concludes that it has become a point of increasing conflict for users, reformers, and purveyors.

The heavily illustrated Smoking under the Tsars taps into bountiful material in newspapers, industry publications, etiquette manuals, propaganda posters, popular literature, memoirs, cartoons, poetry, and advertising. Starks frames her history within the latest scholarship in imperial and early Soviet history and public health, anthropology and addiction studies. The result is an ambitious social and cultural exploration of the interaction of institutions, ideas, practice, policy, consumption, identity, and the body. Starks has reconstructed how Russian smokers experienced, understood, and presented their habit in all its biological, psychological, social, and sensory inflections, providing the reader with incredible images and a unique application of anthropology and sensory analysis to the experience of tobacco dependency.
Publié par Alexandre Klein à 06:08