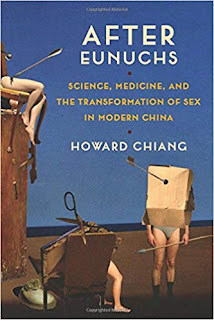 After Eunuchs: Science, Medicine, and the Transformation of Sex in Modern China

For much of Chinese history, the eunuch stood out as an exceptional figure at the margins of gender categories. Amid the disintegration of the Qing Empire, men and women in China began to understand their differences in the language of modern science. In After Eunuchs, Howard Chiang traces the genealogy of sexual knowledge from the demise of eunuchism to the emergence of transsexuality, showing the centrality of new epistemic structures to the formation of Chinese modernity.

From anticastration discourses in the late Qing era to sex-reassignment surgeries in Taiwan in the 1950s and queer movements in the 1980s and 1990s, After Eunuchs explores the ways the introduction of Western biomedical sciences transformed normative meanings of gender, sexuality, and the body in China. Chiang investigates how competing definitions of sex circulated in science, medicine, vernacular culture, and the periodical press, bringing to light a rich and vibrant discourse of sex change in the first half of the twentieth century. He focuses on the stories of gender and sexual minorities as well as a large supporting cast of doctors, scientists, philosophers, educators, reformers, journalists, and tabloid writers, as they debated the questions of political sovereignty, national belonging, cultural authenticity, scientific modernity, human difference, and the power and authority of truths about sex. Theoretically sophisticated and far-reaching, After Eunuchs is an innovative contribution to the history and philosophy of science and queer and Sinophone studies.
Publié par Alexandre Klein à 06:01